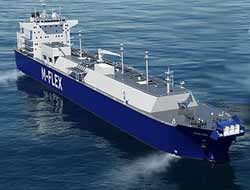 FLEX LNG Ltd. has announced its intention to undertake a private placement of up to $170 million of new equity.

FLEX LNG Ltd. (Oslo OTC: FLNG) has announced its intention to undertake a private placement of up to $170 million of new equity.

FLEX LNG LTD was founded in 2006 with the purpose of commercializing the world's first floating LNG production unit.

The SPB containment technology was developed by Ishikawajima-Harima Heavy Industries Co Ltd of Japan (IHI) which granted SHI a license in 2004.

The purpose of the new private placement is to finance the second yard instalment for the company's first two floating LNG producers. The proceeds of the placement would also allow the company to grow the fleet beyond the existing two firm vessels.

Of the total $170 million equity private placement, existing shareholders hold warrants that if exercised in full will raise $50 million.

This news is a total 1085 time has been read