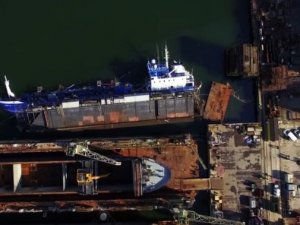 The accident occurred on April 27 and immediate actions for evacuation of the crew was taken, which prevented any injuries and casualties. All the people from the floating dock were safely disembarked to the shore. The local fire brigade laid oil booms at the scene of the capsized dock and only minimal leak and pollution at the region. The dock and tanker remained partially above the water, resting the bottom. The authorities sent team of divers to inspect the site of the capsizing and will consider the towing and refloating of the both vessels.

The local authorities initiated investigation for the root cause of the accident. The circumstances around the capsizing were not revealed.

“Security procedures were immediately implemented and it was immediately taken measures relating to the evacuation of the crew and the protection of environment”, said the official statement of Nauta Repair yard.

This news is a total 1713 time has been read
Tags: Floating dock with tanker Hordafor V capsized at Nauta Repair yard in Poland