Floating Power Plants Are Taking to the High Seas 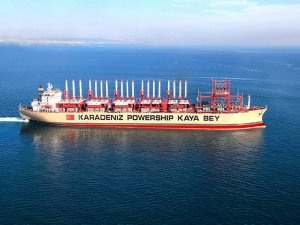 As economic lockdowns complicate efforts to bring electricity to every corner of the planet, one company is putting generation units on ships that can sit offshore and plug into local grids at short notice.

Karpowership is busy marketing floating power plants across the developing world, where governments are seeking extra voltage to power hospitals and other facilities to keep the lights on during the coronavirus pandemic.

Vessels can hook into an onshore grid quickly, sidestepping the red-tape and construction issues involved with building a traditional power plant. And these ships come with their own fuel — liquefied natural gas and fuel oil — tapping into markets that are currently oversupplied.

“We can deploy them in less than 30 days,” Zeynep Harezi, chief commercial officer of Kapowership, said by phone from her office in Istanbul where the ships are designed.

The generators on the ships can produce between 36 megawatts to 470 megawatts of electricity and are already fully financed. While the ships use fossil fuels and present a challenge to the global drive for cleaner energy, they remain among the few solutions for feeding power to remote areas.

“The concept of a fully integrated floating re-gasification and power plant may be a more realistic solution to grant easy access to clean electricity production,” the IGU said. “Such fast track projects, built and commissioned at reputed shipyards, may materialize in the near future.”

Karpowership has the biggest fleet of the vessels. Starting from the first ship for Iraq, which took three years to build in 2010, it now operates 25 such ships in 11 countries from Mozambique to Cuba to Indonesia. Coronavirus hasn’t slowed work, opening some opportunities for new markets instead.

The company converts existing dry bulk vessels, buys engines in bulk and builds them “one after another, almost like a production line,” Harezi said.

The technology for the power plant is internal combustion engine, rather than more typical turbines. While more expensive to build, they are cheaper to maintain and better suited for countries in hot climates with unstable grids, which are often in desperate need for power to avoid blackouts.

At 8 to 10 cents a kilowatt-hour, Karpowership provides a power ship, a floating storage and re-gasification unit for LNG and, if required, the fuel itself.

“If the customer asks to procure LNG on our behalf, we collect offers like regular players,” she said. “We make it as transparent as possible.”

The ship can use LNG or fuel oil. Some start with the latter and then switch. The company targets for its power ships to be operating at 80% LNG-to-power by 2025.

Since traditional power plants on land can take six years or more to complete, floating units have a distinct advantage and can appear in under three months to deal with a surge in demand. While these ships often are initially thought as a bridge solution until something more permanent can be built, some of the ships stay long-term, she said.

Karpowership is building 4,000 megawatts of new capacity on 20 ships, aiming to double the fleet size in the next three to five years, both in terms of megawatts and number of ships.

And as the coronavirus pandemic keeps large swathes of economies on lockdown, Harezi said her teams living and working on power ships for three months or more present a “natural quarantine environment.”

This news is a total 2582 time has been read
Tags: coronavirus, power ships