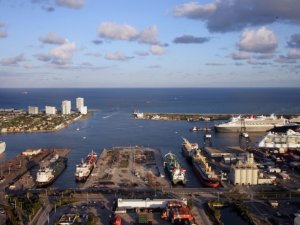 Hurricane Irma may now be gone, but its fallout will continue to haunt Florida for at least the next few days as the largest U.S. gasoline market after California and Texas thirsts for the fuel.

The state gets almost all of its gasoline via its ports. While Port Tampa Bay and Port Everglades, which combined handle about 700,000 barrels a day of petroleum, are quickly restarting operations, it will take days for the fuel to make its way to retail stations, with the priority being first responders, utility trucks and work crews clearing roads.

Florida last week ordered the evacuation of more than 6 million people. The bottom-line message for those who drove north to escape the storm: Stay there a day or two, says Patrick DeHaan, senior petroleum analyst at Boston-based GasBuddy, which monitors fuel markets across the country.

“Availability is still challenging and going to get worse,” Haan said in a telephone interview Monday. “There’s not enough fuel for emergency responders, let alone people trying to go back to Florida.”

Florida Governor Rick Scott’s office said the state is working to find routes for delivering fuel to gas stations and first responders. Scott also waived Florida’s motor fuel import tax for five days and rescinded all weight and driver restrictions for highways so supplies could be brought to the state quickly.

Those measures may help clear the way for more deliveries via tanker trucks than is typical for the state, said James Miller, a spokesman for the Florida Petroleum Marketers & Convenience Store Association. Miller said he couldn’t quantify how much more of the fuel would be made available through those means.

While Port Tampa Bay was shut after suffering minor damage during the storm, it was expected to open on Tuesday, said Samara Sodos, a spokeswoman for the facility. The Florida Department of Transportation has cleared roads to the port, and the state’s highway patrol will escort trucks to resupply gas stations.

Port Everglades sustained “minimal” damage, and is also expected to reopen Tuesday, according to spokeswoman Ellen Kennedy. Three petroleum tankers and two cargo ships were waiting offshore with the U.S. Coast Guard expected to complete its surveys of the harbor in the morning. The port was scheduled to get 10 fuel tankers through Friday.

Additionally, five of 12 terminals at the port were up and running, with five more are set to be opened by mid-day, Kennedy said in an email. Tanker trucks were filled and positioned at the Everglades port before the storm to enable a quick resumption of supplies out into the community.

Citgo Petroleum Corp., which operates terminals in Niceville, Port Everglades and Tampa, also was able to restart some of its operations at those sites, April Andrews, a spokeswoman for the company, said by email.

The Port of Jacksonville may have more difficulty reopening, Miller said.

The dearth of fuel has become one of the main obstacles to recovery after Irma knocked out power to millions and wrought billions of dollars in damage over the weekend. DeHaan estimates that about 42 percent of Florida’s gas stations had run out of fuel as of Monday morning. Not only did people who fled the storm fill up on their way out, but those who stayed topped up their tanks in case they needed to leave, Miller said.

The disruption to Florida’s ports and gas stations comes two weeks after Hurricane Harvey led the Texas refineries that supply most of their fuel to shut down, with some of them still working to come back to normal.

While fuel deliveries may soon be starting up, there may be delays on the other end of their routes as well. About 5.54 million utility customers were without power in the state as of 8:59 a.m. New York time on Tuesday. That included about 21 percent of Florida’s gas stations as of Monday, according to DeHaan, whose group is working with utility companies to help find fuel for their trucks.

“If you don’t have any power at the pump, all you have is gas sitting in a truck,” Miller said.

This news is a total 608 time has been read
Tags: Florida Faces Fuel Shortage in Wake of Hurricane Irma