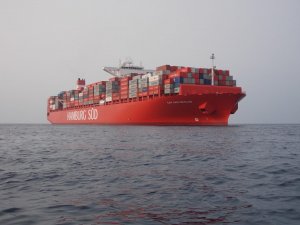 The new containerships will be deployed in the company’s Europe-Mexico-Caribbean Service (EMCS).

“We are constantly improving our services and have invested around 350 million US dollars in our reefer container fleet in the past three years, making it one of the youngest in the market,” Peter Frederiksen, Member of the Executive Board of Hamburg Süd, said.

Currently, the company has four Post Panamax containerships on order. Ordered by Hamburg Süd in 2015, the 3,884 TEU vessels are being built at China’s Jiangsu New Yangzijiang shipyard, according to data provided by VesselsValue.

Additionally, Hamburg Süd revealed that the new setup of its SAWC service commenced in February 2017, offering a weekly connection between South America West Coast, the Caribbean, and North Europe.

The company operates 130 container vessels with a capacity of 625,000 TEU.

This news is a total 1265 time has been read
Tags: Following two incidents which caused dozens of fatalities, the shipbreaking activities were stopped until proper safety arrangements are made. The minister informed that these breaking activities wou