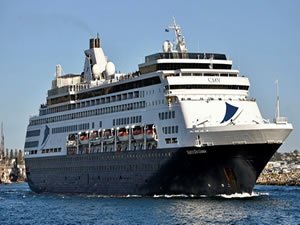 The UK Admiralty Court in September ordered five of the cruise ships sold with the first two auctions having been completed and three more due to close in the coming week.

Separately, CMV had collapse due to the pandemic and gone into administration during the summer. Speaking about the acquisition of the 55,400 gross ton cruise ship, Mário Ferreira, president of Mystic Invest Holding, parent company of Mystic Cruises, said that the company had taken the opportunity to grow its current fleet and to better position it for the expected rebound after the COVID-19 pandemic.

“Our focus is on smaller cruise ships, under one thousand passengers, to create a more personalized, safe and intimate cruise experience for our guests,” Ferreira said in the company’s press release.

“We believe that this segment of the market is better placed to answer to what cruisers will expect in the near future.”

She sailed with Holland America till 2014 when she transferred to P&O Australia sailing as the Pacific Eden.

Global acquired the ship from P&O and in 2018 she was renamed Vasco de Gama. P&O was a creditor and petitioned the Admiralty Court for the auction.

Mystic has been expanding its ocean cruise ship operations starting with the construction of the World Explorer in 2019, which operates under charter and a sister ship the World Voyager completed in August 2020.

Mystic also launched Atlas Ocean Voyages for the North American market and currently is building two additional sister ships, the World Navigator and World Traveller, due to be introduced in 2021 and 2022 for Atlas.

Plans call for three additional sister ships to be built between 2022 and 2023 also to operate for Atlas. The sister ships Mystic is building are smaller ships at 10,000 gross tons and 200 passengers.

Currently docked at Tilbury in the United Kingdom, Mystic said that it plans to use the Vasco de Gama, which can accommodate more than 1,000 passengers, for the British and German markets under Mystic Cruises ownership.

“Our company believes in offering an intimate, safe and great value for money experience to our guests, we believe that the Vasco da Gama will be a great addition to our fleet of ocean cruise ships,” said Ferreira.

It is unclear if the company plans to directly market the ship or seek a charterer to handle sales in those markets.

CMV and its sister company Transocean Tours had operated in those markets.

In addition to the Vasco de Gama, the auction has been completed for the Columbus while the auctions for the cruise ships Astor, Magellan, and Marco Polo are due to be completed between October 15 and 22. The sale of the ships will be subject to confirmation by the court of the outcome of each auction.

This news is a total 3037 time has been read
Tags: Former CMV Cruise Ship Sold at Auction to Portuguese Buyer