Former HMS Bronington, Last of the Royal Navy’s Ton-Class, Sinks Next to Dock in England 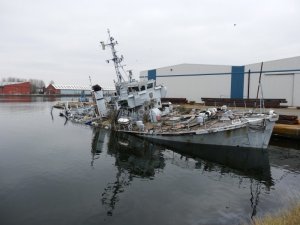 A historic minesweeper formerly belonging to the Royal Navy has sunk while moored at Vittoria Dock in Birkenhead, England where it has been laid up for years.

The Bronington, one of the last vessels in the Royal Navy’s Ton-class, was discovered to have sank sometime between Thursday and Friday.

A witness told gCaptain on Friday that he last saw the vessel afloat Tuesday, but by Friday the ship had partially sank next to the dock in an upright position and was starting to roll onto its side.

The HMS Bronington was launched for the Royal Navy by Cook, Welton, and Gemmel shipbuilders in Yorkshire, England in 1953 and remained in active service until 1988. In 1989 the vessel was purchased by the Bronington Trust, a charity dedicated to her preservation and display to the public. The minesweeper was brought to Salford Quays and later opened to the public in 1992, but ownership eventually transferred to Mersey Docks and Harbour Company and the ship has been been laid up at Vittoria Docks since 2011.

Interestingly, HMS Bronington was also the first and only ship commanded by Prince Charles, who served in the Royal Navy for over five years and spent nearly a year in command of the minesweeper in 1976.

Between 1953 and 1960, about 119 of the wooden-hulled Ton class minesweepers were delivered to the Royal Navy and later used by other navies.

This news is a total 12480 time has been read
Tags: Former HMS Bronington, Last of the Royal Navy’s Ton-Class, Sinks Next to Dock in England