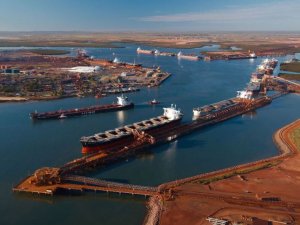 Australia’s Fortescue Metals Group Ltd has won a tender to become the second provider of marine towage services at the port of Port Hedland, the world’s busiest export terminal for iron ore.

Fortescue, which ships 155 million tonnes of iron ore through the port, and is acquiring its own fleet of freighters, said a subsidiary, Pilbara Marine Pty, was granted a towage license by Pilbara Ports Authority, creating a second service provider and additional capacity at the port.

Fortescue was named on a shortlist in 2014 to win the licence, along with Maersk subsidiary Svitzer Australia.

The sole licence is held by the port’s biggest user – BHP Billiton . A tender for the second operator was open in 2014 following pay dispute between Teekay Shipping, which operated the licence for BHP, before being replaced last year.

Port figures show more than 435 million tonnes of iron ore was shipped via Port Hedland last year, with almost 6,000 vessels moving in and out of port waters.

Fortescue said its licence will run for 15 years and is expected to come into effect in 2019.

Fortescue in 2014 announced plans to buy eight iron ore freighters from China for around $500 million, saying the carriers, each capable of carrying between 250,000 and 260,000 tonnes of iron ore, would improve loading efficiencies. (Reporting by James Regan; Editing by Sherry Jacob-Phillips)

This news is a total 14815 time has been read
Tags: Fortescue Named Second Tug Operator at Port Hedland