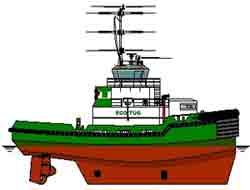 Officials of the Seattle-based marine services company, which specializes in worldwide marine transportation and logistics, say the project must still gain final board approval. But the decision to move forward with the hybrid tug got a boost last week as the Port of Los Angeles pledged US$850,000 to the project, in association with the South Coast Air Quality Management District, and the Long Beach Board of Harbor Commissioners preliminarily approved a US$500,000 contribution to the vessel’s construction.

In exchange for funding, Foss would agree to homeport the new hybrid tug in Southern California for five years.

“Foss is proud to be working with the ports of Long Beach and Los Angeles on such an important project as the hybrid tug,” said Gary Faber, president and COO of Foss. “This is just the latest example of how Foss sits at the leading edge of maritime technology, engineering and shipbuilding. As a company, we’re committed to maintaining our natural environment. Foss anticipates there will be a growing market for our ‘green’ tugs in the years to come.”

This news is a total 1206 time has been read