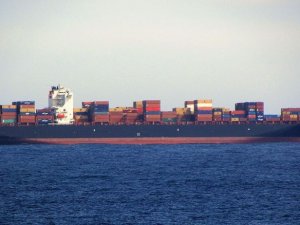 Following the collision, the fishing vessel capsized and sank, throwing into the water nine crew from the boat. In the first minutes were rescued five from the fishermen, but another four went missing. The accident was reported to the local authorities and the maritime rescue coordination center started search and rescue operation. At the site of the collision were dispatched rescue boats and helicopter, which monitor the area around the collision, but still there is no trace from the missing people.

The container carrier is adrift or dead slow ahead near the collision site, headed to heading back to Busan, South Korea. The ship was detained during the further investigation and inspection. There were no injured people from the crew of the container ship. The vessel did not suffered any damages.

This news is a total 1202 time has been read
Tags: Four missing after collision between container ship CSAV Tyndall and fishing boat in Korea Strait