The U.S. Coast Guard and multiple agencies are responding after car carrier became disabled and capsized with a fire on board Sunday morning in St. Simons Sound, Brunswick, Georgia.

The U.S. Coast Guard and multiple agencies are responding after car carrier became disabled and capsized with a fire on board Sunday morning in St. Simons Sound, Brunswick, Georgia.

A search is underway for four missing people.

The U.S. Coast Guard said it was notified at approximately 2 a.m. on Sunday that the 656-foot vehicle carrier Golden Ray was disabled and listing heavily with a fire on board in the St. Simons Sound. The ship had a total of 24 people on board, including 23 crew members and 1 pilot.

The Coast Guard reported on Twitter that it and other agencies had multiple rescue assets on scene and were in process of evacuating crew members from the vessel.

Currently, 20 people have been safely removed and four people remain unaccounted for.

#Update Evacuations of the Golden Ray’s crew continue. All vessel traffic in the Port of Brunswick is currently suspended unless approved by the @USCG Captain of the Port. #HappeningNow 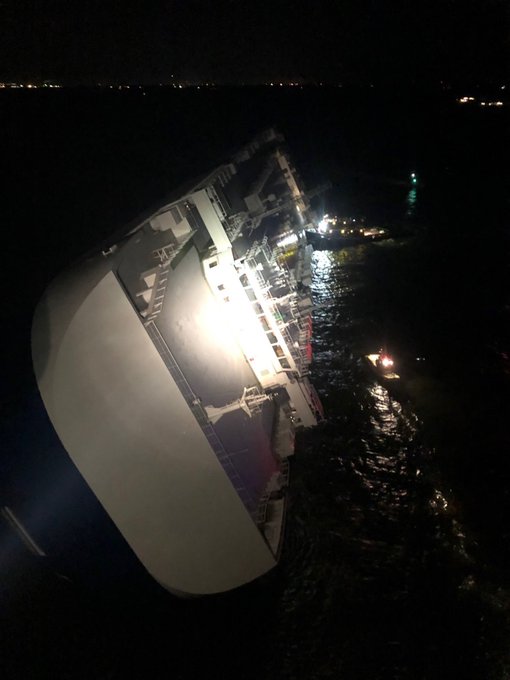 156 people are talking about this

The vessel’s master and chief engineer are assisting authorities and salvage teams to develop plans to stabilize the vessel and continue rescue efforts, the Coast Guard reported.

Coast Guard units involved in the response include:

This news is a total 273 time has been read
Tags: golden bay car carrier, Brunswick, Georgia.