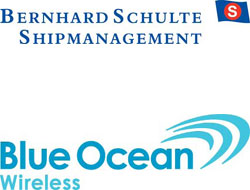 Bernhard Schulte Shipmanagement will install GSM telecomunications across its fleet of 300 vessels.

BERNHARD Schulte Shipmanagement will install GSM telecomunications across its fleet of 300 vessels.

Bernhard Schulte will install Blue Ocean Wireless systems across all its fully managed vessels. Installation is expected to take up to four months to complete.

The company had been trialling the system on two ships for the last four months and, after crew appraisals, decided that it would be rolled out fleet wide.

The announcement comes on the heels of one from Wallem Group, which said it would put GSM services on its vessels for the benefit of its 6,000 seafarers.

?This technology represents a step change in the welfare and working environment of our crew,? said Bernhard Schulte chief executive Andreas Droussiotis.

Blue Ocean Wireless is one of the few telecommunication companies that is offering a ship-wide GSM service, allowing crews the opportunity to use their own mobile phones, albeit with a Blue Ocean SIM card, to make calls and send text messages through the ship"s satellite provider ashore.

?Companies will need to retain crew and if they do it now, it will pay off,? he said. ?This is exactly the Wallem and Bernhard Schulte approach. You do not want to be scrabbling around for crew when the market picks up.?

Bernhard Schulte was formed earlier in the year by the merger of four management companies owned by Germany"s Schulte Group.