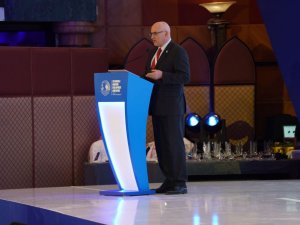 There is no country in the world that has ratified every single International Maritime Organization (IMO) convention, Frederick J. Kenney, Director of Legal and External Affairs at IMO, pointed out at an international conference in Jeddah on November 6.

On the second day of the conference on “Sustainable Maritime Development Towards 2030 and Beyond”, Kenney talked about IMO and other legal regimes – accession to IMO instruments, assistance with legislation as well as compensation regimes.

As explained, the goal of the IMO is to create a level-playing field for shipping, taking into account the importance of the industry for the global economy. Safe, secure and efficient shipping and clean oceans are seen as the ultimate goals achieved primarily through treaties, dozens of codes and regulations.

Currently, there are more than fifty treaties for a complete regime but there are gaps, Director of Legal and External Affairs at IMO noted.

According to Kenney, there are some countries that are close to ratifying all of the treaties. On the other hand, some of them are parties to only two or three conventions.

“When you look at security regimes, for example the 2005 Convention for the Supression on Unlawful Acts against Safety of Marine Navigation (SUA) Protocols which are extremely important maritime security treaties, each of them has less than 40 ratifications,” he said, adding that they are in need for additional ratifications.

Other priorities include the Hong Kong Convention, a treaty for the safe and environmentally sound recycling of ships which was adopted in 2009 but has not entered into force yet. With respect to environmental protection, the HKC would “complete a big gap” when it comes into force, Kenney said. This in addition to the International Convention for the Prevention of Pollution from Ships (MARPOL) and the Ballast Water Management Convention (BWMC) which already entered into force and the upcoming regulations aimed at reducing GHG emissions from shipping.

Another priority is the Cape Town Agreement, a key IMO treaty on the safety of fishing vessels. Described by the IMO’s Director of Legal and External Affairs as “the biggest hole” in the safety regime, the treaty would regulate safety issues for fishermen and their vessels but also have a significant impact on any unrelated illegal fishing practices around the world. At a recent Ministerial Conference on Fishing Vessel Safety and Illegal, Unreported and Unregulated (IUU) Fishing in Spain, 48 countries expressed their intent to ratify the convention by 2022.

“The IMO is putting a lot of effort to gain additional ratifications at the moment so we can get the treaties into force,” Kenney stressed.

He added that the IMO encourages any country to contact the organization for detailed info. The UN agency would provide them with a tailored report and assistance needed to ratify the instruments.

This news is a total 291 time has been read IMO 2020 Entering New Phase with Carriage BanA tweak to new environmental rules for the shipping industry is just days from taking effect, closing off a loophole for would-be cheats looking to cut their fuel bills. Seafarer Happiness Down amid Stress over New Regulations, Increase in RacismWorkload stress caused by changes in regulations has been one of the three main factors impacting the seafarers’ happiness level in the fourth quarter of 2019, just months before the IMO 2020 sulphur cap entered into force.