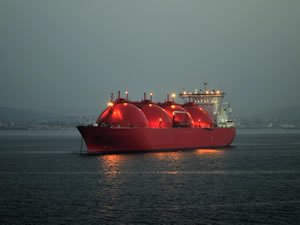 China’s coldest winter in decades meant state-owned energy giant Sinopec was desperate to unload heating fuel from a vessel headed to a northern port, yet freezing temperatures that have swept parts of Asia froze a thick sheet of ice and blocked access.

With the help of an icebreaker ship and a cannon loaded with hot water, workers spent 20 hours clearing a pathway for the tanker to dock and discharge its cargo of liquefied natural gas in Tianjin.

The effort underscores how frigid temperatures have upended energy markets across Asia, catching some companies flat-footed and sending prices for electricity, fuel and vessels to record highs. And with temperatures showing no signs of easing in key markets in Japan, China and South Korea, it could be weeks before any return to normality.

“This winter has definitely caught the market off-guard,” said Henning Gloystein, a director at Eurasia Group. “My hunch is that this spike will end with springtime.”

A La Nina weather phenomenon has sent a wave of cold air across North Asia this winter. Beijing last week recorded its lowest temperature since 1966, while Seoul had its coldest day since 1986, and record snowfall is sweeping across Japan’s west coast.

The chill is creating a surge in heating demand across the region. Japan’s spot electricity prices have soared more than 10-fold to record levels, while South Korea and China’s main grid have set records for power demand.

Those three countries are the world’s biggest LNG importers, and the extra demand has helped send prices for spot cargoes and tankers carrying the fuel to record levels. Disruptions at some massive export plants and shipping delays caused by Panama Canal congestion are also contributing, said Jenny Yang, a senior director at IHS Markit Ltd. in Beijing.

“The cold winter is not the only reason contributing to the recent dramatic spot price spikes,” she said. “The spikes were likely due to a combination of supply, demand, and shipping factors in a relatively thin and illiquid market.”

Japan’s largest power suppliers, including Tokyo Electric Power Co., have implored customers to conserve electricity, while the nation’s grid manager has ordered power producers in a number of regions to boost generating capacity to maximum output to help avoid a supply crunch. Utilities are sharing electricity supplies with rivals.

Snow accumulated in parts of Niigata prefecture is 10 times the level of a normal year, according to national broadcaster NHK.

China’s power generation is also spurring consumption of coal, which still provides the majority of the country’s energy. Futures on the Zhengzhou Commodity Exchange soared to records last month, while a spot deal was recently done at 900 yuan ($139) a ton, the highest in nine years, according to consulting firm Fengkuang Coal Logistics.

At least one coal ship that’s been idling off northern China had to relocate to avoid ice forming near the coast, according to vessel-tracking data

In parts of China where coal supply is particularly tight, the government has curtailed electricity to businesses to make sure there’s enough supply for home heating. That’s led to a surge in orders for portable generators and extra demand for the diesel that fuels them.

The winter stress isn’t likely to end soon. Sub-freezing temperatures and disruptive winds are expected for the rest of the week in Northeast China, according to the country’s meteorological agency. That will keep pressure on inventories of coal at Chinese power plants until weather starts to warm up, said James Stevenson, senior director at IHS Markit.

“This will likely linger as an issue through to the end of the winter, and it will create a bigger restocking need coming out of the winter,” Stevenson said in an emailed message. “All in all, I think it suggests strong pricing — albeit likely off current highs — into the second quarter.”