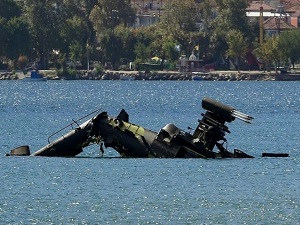 4 sailors were injured, one of them seriously, as the helicopter crashed during takeoff, the French defense ministry said. The helicopter crew escaped unharmed as the crash injured four persons on the flight deck. The seriously injured sailor was treated by the ship’s medical crew before being medically evacuated to a military hospital.

BPC Dixmude was conducting training flights in the North Sea, 70 nautical miles off Dunkirk when the accident happened. The French Navy said the cause of the accident was under investigation without saying whether it would impact the ship’s operational schedule. BPC Dixmude is one of the French Navy ships scheduled to join NATO exercise Trident Juncture which kicks off on October 25 in Norway.