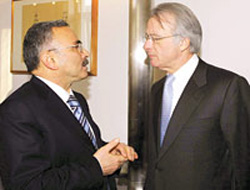 The recent exclusion of Gaz de France (GDF) from the $7.3-billion Nabucco pipeline project has raised eyebrows in the EU, adding to the already mounting European concerns over Turkey's support for the project.

Last week GDF became the latest victim to suffer from ongoing bitter political disputes between France and Turkey when it was shut out of a consortium to build the Nabucco gas pipeline from Turkey to central Europe last week at Ankara's behest.

GDF, excluded from Nabucco in favor of Germany's RWE, and other French companies are mostly paying the price for President Nicolas Sarkozy's outright opposition to Turkey's membership in the EU and a French National Assembly vote to criminalize denial of Armenian claims of genocide at the hands of the late Ottoman Empire. Earlier Turkey awarded a big military helicopter contract to an Italian firm rather than to French-based European Aeronautic Defense and Space Company (EADS) after the French National Assembly vote. Jozias van Aartsen, the EU's coordinator for natural gas projects in southern Europe, will visit Ankara on Thursday to press PM Tayyip Erdo?an to tackle some issues, including the exclusion of Gaz de France, the Financial Times reported yesterday. Other sources of EU complaints are the fact that Turkey has failed to agree to a pricing framework for the use of the pipeline and that supplies from Turkey to Greece have been interrupted recently following the loss of supplies from Iran.

The project, a 3,300- kilometer route to bring central Europe gas from Azerbaijan and other countries in the Caspian region, is supposed to bolster the EU's energy security by providing an alternative to Russian supplies.

Gazprom's dispute with Ukraine over claims of unpaid bills has highlighted concerns about the EU's increasing reliance on Russian gas. Yet some in the EU argue there is little point to backing Nabucco if it makes the EU more dependent on gas sources that were less reliable than Russia, the Financial Times said.

GDF said last week that it had not given up on being allowed to join Nabucco, but that it was now looking at other projects in the area. These include South Stream, a plan between Gazprom and Eni of Italy to build a pipeline to bring natural gas from Russia to Italy.

European companies have already invested 16 billion euros ($23 billion) in Turkey and tens of billions more are expected as Turkey, growing at 5-7 percent a year, modernizes its infrastructure and privatizes key sectors.

Yet while German trade and investment are booming, French business is suffering a backlash due to the political disputes.

"France has lost contracts to Germany, the UK, Spain, Italy and Greece because of its constant Turkey-bashing discourse," Bahad?r Kalea?as?, Brussels representative of the Turkish Industrialists' and Business Association (TÜS?AD), told Reuters.

Across Europe, the business community supports Turkey's EU accession process, even in countries such as Germany and Austria, where opinion polls show majority public opposition to the idea. Yet business leaders acknowledge that their voice is muted due to political sensitivities. "We are in favor of a strong economic relationship," says Philippe de Buck, secretary-general of BusinessEurope, the main umbrella organization for EU business. "But the political issues are not for us to judge. It's not up to us to judge membership."

Executives see the sprawling NATO member on the hinge of Europe and the Middle East as a giant market of 71 million consumers, with a booming economy, plentiful cheap labor and major modernization needs. "Turkey ... has a gigantic economic potential," Laurence Parisot, head of French employers' movement MEDEF, told Reuters. French companies with major investments there include carmaker Renault and supermarket chain Carrefour.

"What we tell our Turkish opposite numbers is 'keep moving forward in the negotiation process with Europe and don't ask all the time whether Europe wants your accession or not'," she said. "We'll see how the accession dynamics turn out in 10 years' time. In the meantime, above all let us not make it harder on either side to work together."

The European Commission is trying to use the talks to coax Turkey into opening its markets wider to European firms.

Banks are already pouring in. Insurers and energy firms are keen to follow. But the slow pace of negotiations dictated by France and Greek Cyprus gives Ankara little incentive to push reforms. Some EU officials are frustrated that the business community is not more vocal in support of Turkey's accession process. They are encouraging BusinessEurope and TÜS?AD to stage a public event this year to highlight the potential economic benefits of Turkey's membership.

Sarkozy's declarations that Turkey has no place in the EU have soured the mood. Turkish officials say French companies stand to lose out in forthcoming privatizations and nuclear energy, environmental, waste management and water projects due to his stance. Murat Mercan, chairman of the Turkish Parliament's foreign affairs committee, says government attitudes to the accession process are bound to sway Turkish public procurement decisions.

"Lack of willingness by major EU countries -- I don't want to name any -- and biased political debate on the issue of Turkey's membership may create a reluctance on the Turkish side to enable those countries to win those major projects," he said.

Germany seems to have escaped such retaliation despite the fact that Chancellor Angela Merkel's Christian Democrats oppose full membership and say the EU should offer Ankara only a "privileged partnership.? Fabian Wehnert of the Confederation of German Industry (BDI) said business has not suffered because Merkel has respected her predecessor's word and allowed the talks to go ahead.

This news is a total 1133 time has been read