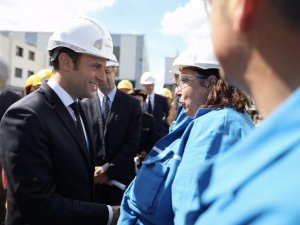 “I want to see the initial balance agreed in April to be revised,” Macron is quoted as saying by Reuters while attending the delivery ceremony of MSC’s new cruise ship MSC Meraviglia built by the French yard.

At 171,598 GRT, MSC Meraviglia is the biggest ship to ever be built by a European shipyard for a European owner. It is one of the four vessels to be built by STX France for MSC.

According to Macron, “STX France’s shareholder structure should neither put jobs at risk nor jeopardize its capacity to win new business,” Reuters added.

However, the French president assured that he supports the deal between the Italian shipbuilding group and STX.

Italian shipbuilder Fincantieri signed the share purchase agreement for the acquisition of majority share capital of STX France – 66.66 percent- from its current shareholder, STX Europe AS in mid- May.

The shipbuilder further pointed out at the time that it was continuing to negotiate with the French State for the finalization of the shareholders’ agreement for the yard in accordance with the Heads of Terms signed on April 12.

STX France has approximately 2,600 employees and a network of more than 500 subcontractors. In 2016 it reported revenues of approximately EUR 1.4 billion.

If completed, the acquisition of STX France, which specializes in building cruise ships, is expected to boost Fincantieri’s position in the cruise segment.

This news is a total 791 time has been read
Tags: French President to Look into Terms of Fincantieri’s Acquisition of STX France