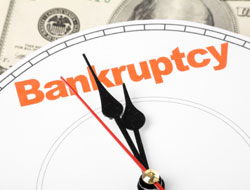 The company, which had warned its works committee on Wednesday that it was considering going into liquidation, formally declared itself unable to meet its financial obligations before the Marseilles court of commerce this morning.

It will now be for the court to decide whether to put it into administration, which will allow for the elaboration of a plan to save the company from closure, to put it directly into liquidation.

The company, a subsidiary of Spain"s Boluda group, which emloys 130 people in Marseilles, claimed that it was in financial difficulty but union representatives said that this was a pretext.

The company and the CGT union confederation have been in dispute since January over what the union claims is the company"s ?abusive? use of sub-contractors.

Seven employees were sacked in January for allegedly interfering with the right to work of their colleagues.

Since then, there have been regular strikes and, last month, the company took another five employees to court claiming that they too had been preventing their colleagues from working.

The company"s application for an injunction against the employees was rejected, however, and, since then, it has warned that it is considering closing the company.

UNM employees have been occupying the company"s premises since Monday, preventing an SNCM car ferry currently being repaired by the company from leaving dry dock.

The CGT has called on its members to stage a demonstration of support for UNM employees tomorrow.

A union representative claimed that the company"s 130-strong workforce was being given a choice between ?slavery and unemployment?.

The local employers" organisation UPE 13, claimed that the closure of UNM would be the latest in a series of company departures at the port. It would mark the end of shiprepair at France"s leading port, and result in the loss of 130 jobs at UNM itself and 400 more among sub-contractors.

This news is a total 704 time has been read