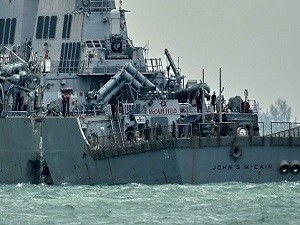 A full evacuation has commenced after two ships have collided outside the Sture-terminal in Hjeltefjord in Hordaland. The frigate takes in large amounts of water, according to VG. Several persons are injured.

The fire service has been notified that it has leaked about ten cubic metres of oil from the tanker. He states that the frigate has taken in a lot of water and that it has lopsided a lot to one side. But that seems to be stabilized now, Hartvigsen elaborates.

According to Commander on Watch in the Emergency Centre (110) in Hordaland, Ole Jakob Hartvigsen, there were 137 persons on board the frigate and 25 on the tanker, which was on its way out of the Sture-terminal when the collision occurred.

Seven persons are injured. Firefighters, rescue boats and divers are on their way to the area. In addition, the fire service is in preparedness nearby on land. Evacuation has just begun, he says to VG just before 05.00 am on Thursday.

The frigate lies with the bow all the way up to the shoreline. There is a big hole on the starboard side and there is no control over the influx of water, Officer in Charge at the Central Rescue Centre south, at Sola, Eirik Walle tells Dagbladet. To NTB, the rescue leader says there is some danger that the frigate, which participates in the NATO exercise, Trident Juncture, will sink.

Currently, all crew is evacuated from the frigate. None of them appears to be seriously injured in the event.

Equinor has decided to shut down the operation at the plant. Personnel at Sture who do not have emergency service responsibilities are evacuated as well. Shutdown and evacuation are carried out as a precautionary measure, Equinor writes in a press release. The Sture-terminal is an oil & gas terminal and transit port for crude oil and LPG.

Many vessels in the area

Right now, the vessels that are not directly linked to rescue operations have withdrawn and are at standby, reports the Red Cross, who assists in the rescue operation. The frigate is grounded with the bow pointing to land. We and several others are in a position to ensure if it is sinking any further. The tanker seems to be ok, says Terje Hårvik, Captain of the Red Cross’ vessel in the area.

He informs that there are plenty of Navy vessels in the area (Haakonsvern in Bergen is the main base of the Norwegian Navy). In addition to us, there are several tugs and rescue vessels in the area. Everybody is evacuated from the vessels, so the danger with regard to life and health is over, Hårvik elaborates.

The Navy takes over the responsibility

The Frigate KNM «Helge Ingstad» was mentioned in VG a few weeks ago in advance of the major NATO exercise Trident Juncture in Norway. At 7.30 am, Colonel Lieutenant and Press spokesperson at the Armed Forces Operating Headquarters, Ivar Moen, informs that the main responsibility for the salvage action is taken over by the Norwegian Armed Forces.

It is too early to say how long the salvage will take at the moment. We look at all relevant capacities in the area to get started as soon as possible, but we do not have a full overview of the situation yet. We must get back to sustained damage at a later point in time, Moen tells VG.

Colonel Lieutenant and Press Spokesperson in the Armed Forces, Vegard Finberg, confirms to VG that the frigate participates in the Trident Juncture. The frigate is finished with the mission, and is on its way back to the base at Haakonsvern, Finberg explains and adds that the Armed Forces were notified of the accident at 04.15 am.