Frigate Ran Aground in Norway 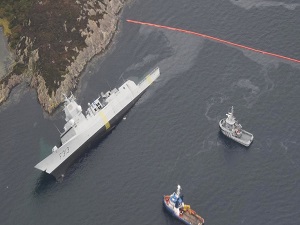 Norway’s AEGIS frigate HNoMS Helge Ingstad has spent the night on the rocks after sustaining a gashing hole in her hull following a collision with a commercial tanker on November 8.

In their latest update, the Norwegian Navy said the frigate remained in place on the rocks in Hjeltefjorden where she was intentionally grounded in order to prevent her sinking. The navy further said it is satisfied with the progress made to salvage the frigate.

Fixing points on the frigate’s hull were welded over night while a foundation was laid out on land. While the navy did not go into the specifics on the plan, it seems the holes in the frigate’s hull will be repaired before any attempts to tow the ship are made. Traffic in Hjeltefjorden, north of the Sture terminal, has been temporarily prohibited, the Norwegian Coastal Administration (NCA) said.

To remind, HNoMS Helge Ingstad collided with the tanker Sola TS and the tug Tenax in Hjeltefjorden while returning from NATO exercise Trident Juncture. Following the observation of NCA’s surveillance craft, no significant oil leakage was reported.  The leak from the damaged ship is considerably reduced and is under control.