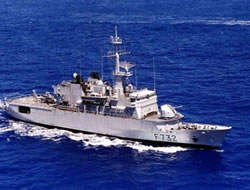 A French Navy frigate had to be towed to naval base in Pointe De La Galets, La Reunion having been disabled after a severe engine fire that broke out on September 30th.

The frigate Nivôse was steaming her way toward Mauritius in the Indian Ocean when the fire started.

Fortunately, the frigate’s sister ship Floreal was in the vicinity and was able to assist the fire-stricken ship’s crew in containing the fire. No injuries have been reported.

Initial reports indicate that the damage on the vessel is extensive.

Once the fire was extinguished on Tuesday morning, the vessel had lost propulsion power, electricity, water supply and air conditioning.