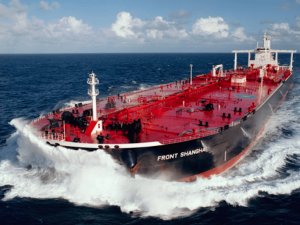 Crude oil tanker firm Frontline declared its first dividend in more than two years on Wednesday and said it plans to increase the payout in the fourth quarter as shipping rates continue to rise.

The third-quarter dividend of $0.10 per share, its first since early 2017, follows a period of debt repayment and investment in vessels, as well as in scrubber systems that clean shipping exhaust.

“Based on current market conditions, the company expects the board of directors to announce a dividend for the fourth quarter of 2019 … well in excess of the dividend declared for the third,” Frontline wrote in its July-September earnings report.

While tanker rates have come down from a surge in early October, the balance between supply and demand remains favorable, it added.

“We believe that tanker market fundamentals look encouraging and we have entered a period of substantially stronger vessel earnings,” Frontline Management CEO Robert Hvide Macleod said in a statement.

“Rates have remained at elevated levels thus far in the fourth quarter, and we expect a strong earnings environment for the balance of the year,” the company said.

To take advantage of the market upturn, the company has mostly avoided long-term charters for its fleet, choosing instead to employ a “large majority” of its vessels in the spot market.

While Frontline posted a net loss of $10 million for the third quarter, its nine-month result has swung to a profit of $31.2 million from a year-ago loss of $34.3 million.

This news is a total 524 time has been read
Tags: Frontline, tanker rates, tankers