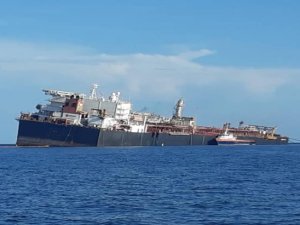 An alarming photo is making the rounds on the internet today showing an idled Floating Storage and Offshore (FSO) vessel containing tens of million of gallons of oil with a severe list off the coast of Venezuela, raising fears an environmental disaster.

The FSO Nabarima, which is anchored in the Gulf of Paria, is holding some 1.3 million barrels of crude oil.

The photo was reportedly taken October 13 and published Friday by Fishermen and Friends of the Sea (FFOS).

A Reuters report today citing an anonymous source said the idled facility is undergoing repairs to replace valves on the vessel.

The facility is operated by a joint venture by Venezuela state oil company PDVSA and Italy’s Eni, which have been exploring options to offload crude from the vessel. It has been idled for over a year due to U.S. sanctions on PDVSA.

Over the last few months, the FSO has experienced issues that have raised serious environmental concerns if the vessel were to sink.

PDVSA in September sought to downplay the risks after the vessel developed an 8 degree list in late August, reportedly the result of flooding in the engine room.

TankerTrackers, which has been tracking the vessel, said it is investigating the incident. The incident comes as another stranded offshore oil facility, named Safer, has been deteriorating in the Red Sea off Yemen since 2015, threatening to spill 1.1 million barrels of crude oil.

A report earlier this week said a United Nations team was awaiting agreement with Yemen’s Houthis to access the vessel, but it was likely to be several weeks before any plan is finalized.

This news is a total 2159 time has been read
Tags: PDVSA # FSO # Gulf of Paria # Venezuela # Nabarima