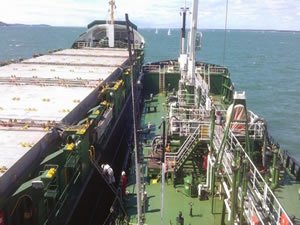 Emblematic of the topsy-turvy year shipping has endured, the Hi5, the spread between high and low sulphur fuel oil is closing out 2020 heading into triple-digit territory.

This time last year – before the world was plunged into a pandemic – the January 1 global sulphur cap introduction and its subsequent effects on the two main bunker fuels was expected to be one of the main talking points for shipping throughout 2020. In the end, the legislation came into force, the new low sulphur fuel was bought and used with little problem and the price differential with high sulphur fuel oil – the so-called Hi5 – collapsed within the opening weeks of the year, even before coronavirus was declared a global pandemic in March.

From an all-time high of $343 per ton in the first week of the year, the Hi5 has sat stubbornly in the $50 to $65 range for most of 2020. However, over the past five weeks the price differential has consistently risen (see chart below) to nudge towards the $80 mark among the world’s top 20 largest bunkering hubs.

In Houston, the largest bunkering hub in the Americas, the $100 mark has already been broken with Fujairah, the Middle East’s top spot for marine fuel, not far behind. The price differential in Singapore and Rotterdam stood at $73.50 and $81.25 respectively today.

“The spread has already crossed $100 per ton at Houston, where the tendency is strongest, and the other bunker hubs seem on track to follow,” commented Christian Plum, co-founder of BunkerMetric, a Denmark-based digital technology firm. BunkerMetric has detected that low sulphur fuel oil prices lately are correlating more closely to Gasoil prices rather than heavy sulphur fuel oil.

BIMCO is predicting the $100 price differential mark could be broken in Singapore, the world’s top bunkering hub, as early as next month. The shipping organisation believes the post-Covid-19 normalised spread will likely stick at around $100 within a band of $20 per ton.

Ahead of the sulphur cap coming into force a price differential of $150 per ton was seen as the absolute outlier in terms of timely payback times for those who had invested in scrubbers. Given the low Hi-5 numbers seen throughout 2020, analysts contacted by Splash suggest this number has crept up to $200 for 2021 and 2022.

“The widening of the spread has been driven by three factors: continued economic recovery in Asia, which has increased demand for light products that compete against VLSFO in the refinery process, current subdued demand for HSFO, and an increase in outright prices overall, which tends to widen spreads,” commented Mark Waddington from Channoil Consulting.

On the bunker futures markets, Chris Hudson, a director at Freight Investor Services (FIS) in London, said the spread difference for the front month future has recovered from around $57 at the end of October to over $80 currently, and on the Cal 21 period from $70 to $94.

“The main driving forces behind this shift is a return to some normality on 0.5% demand, with shipping operations recovering somewhat from the global lockdowns, as well as the dwindling strength of pricings on the old HSFO,” Hudson explained.

Latest data from Clarksons Research shows scrubbers have been installed on 4.1% of all ships trading today and are pencilled in for 12.4% of all vessels contracted at shipyards.

This news is a total 4189 time has been read
Tags: Fuel price, spread heads towards triple, digit territory