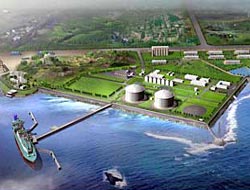 The QingLanShan terminal at the Fujian Refinery in south-eastern China has received its first cargo of crude oil.

The QingLanShan terminal at the Fujian Refinery in south-eastern China has received its first cargo of crude oil.

The QingLanShan terminal at the Fujian Refinery in south-eastern China has received its first cargo of crude oil. Close to a million barrels of Arabian Extra Light was carried by the tanker Cosbright Lake from Ras Tanura to QingLanShan. The 2003-built 299,079 dwt Cosbright Lake is a double-hulled Panama-flagged VLCC owned by COSCO and operated by the Dalian Ocean Shipping Co.

QingLanShan was built to feed Fujian Refining and Petrochemical Co. Ltd. (FREP) and can handle tankers up to the VLCC class.

"With the inauguration of this deep-water terminal, FREP-JV is demonstrating its readiness to help meet China's domestic oil demand as well as future demand," said a Saudi Aramco spokesman.

?The arrival of Arabian crude oil to this terminal signifies Saudi Aramco's supply commitment as a shareholder, and I would like to assure you that a stream of Saudi Arabian crude is now making its steady flow to Fujian Province and that it will continue for many generations,? the spokesman added.

A chartering manager handling Asian routes pointed out to that China has many new refining facilities that are set to come on-stream over the next few years.

?Many projects are currently underway for new refineries or existing refineries to ramp up their production,? he said.

?That would of course create the necessity for more supertanker berths.?

Separate reports earlier last year had indicated that Chinese companies will likely need to order some 65 VLCCs by 2012, although it is unclear what impact the current recession will have on those figures.

Previous data based on China's GDP growth of 10% per year indicates that the country will need to increase crude oil import volumes by 8%.

Volumes of crude oil imports were expected to rise to 180 million mt in 2008 and 200 million mt this year.

Some 90% of oil imports into China are moved on foreign-owned tankers, but Chinese authorities reportedly want to cut that to 50%.

This news is a total 3065 time has been read