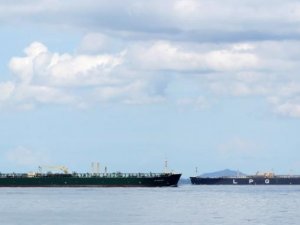 Tankers full of liquefied petroleum gas (LPG) are gathering off Singapore waiting for buyers as a flood of supply from the U.S. and Saudi Arabia has outpaced demand for the fuel, trade and industry sources said on Thursday.

The number of ships congregating near Singapore, a key ship-fueling and oil product trading area for Asia, has surged to over 10 from under seven just five weeks ago, said trading and industry sources that are familiar with the market. Shipping data carried on Thomson Reuters Eikon shows that there are at least eight Very Large Gas Carriers (VLGCs) anchored near Singapore including the Chaparral, Ming Long, Promise, Cratis, British Commerce and Berge Nantong.

LPG was once a tightly supplied market with petrochemical manufacturers competing for the fuel with its main residential and commercial consumers that use it for heating and cooking. Now, the market for the fuel is in a dire state following new supply pouring in from the United States.

“There could be as many as 11 floaters being anchored off Singapore waters at the moment. The growth in supplies was too fast,” said consultant Ong Han Wee of energy consulting firm FGE.

U.S. exports for arrival in Asia this month could be about 750,000 tonnes, data from FGE showed. In June, they hit a record of about 1 million tonnes, FGE said.At the same time, Saudi Arabian exports for August arrival to Asia will rise to 840,000 tonnes, the highest monthly volume this year, said Ong.

The surge in supply coincides with tapering demand in China, whose petrochemical plants have driven much of the demand growth for LPG in the region. LPG imports to China slumped to 408,350 tonnes in July, down 17.8 percent from June, customs data showed.LPG for prompt month delivery was estimated to be around $300 a tonne on Aug. 24, data from brokerage Ginga showed, down from about $383 a tonne in early January this year.

The glut of tankers has pushed down chartering rates for these VLGC to about $10,000 a day from about $13,000 to $14,000 a day in the second-half of July, traders said.The gloomy sight of the wayward tankers is expected to even last into the peak winter season when demand for LPG as a heating fuel surges.

“I do not see the floaters disappearing totally even in the winter months. There would still be floaters but just fewer in numbers,” said Ong.

This news is a total 3632 time has been read
Tags: Fully Laden VLGCs Gather Off Singapore, turkıshmaritime