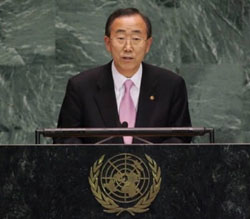 The considerations regarding future GHG regulation of shipping are ongoing not only in IMO and UNFCCC, but also in AGF established by the UN Secretary General Ban Ki-moon.

The considerations regarding future GHG regulation of shipping are ongoing not only in IMO and UNFCCC, but also in AGF established by the UN Secretary General Ban Ki-moon.

The considerations regarding future GHG regulation of shipping are ongoing not only in IMO and UNFCCC, but also in a special High-level Advisory Group on Climate Change Financing (AGF) established by the UN Secretary General Ban Ki-moon, and here shipping is being looked upon as one of the potential sources of revenue. With this background, the BIMCO President Robert Lorenz-Meyer has found it necessary to approach the Co-Chair of the AGF and Premier Minister of Norway Jens Stoltenberg to express some concerns and considerations on behalf of BIMCO"s members. Note that the AGF will present its recommendation at the climate summit in Mexico in December 2010 (COP 16).

The main points in the letter are that shipping accepts a burden that is commensurate to its share of the problem and would like to avoid being targeted as a source of funding but more be seen as an indispensable facilitator of world trade and growth. It is stressed that shipping is responsible for around 3% of global GHG emissions today and carries some 80-90% of world trade. These figures reflect that shipping is the most energy efficient mode of transportation per ton-mile.

UNFCCC and IMO are discussing how the customary practices and working principles of both organisations can be met seen in the light that UNFCCC uses the principle of Common But Differentiated Responsibility (CBDR) while IMO applies the principle of No More Favourable Treatment; the latter ensures a level playing field for shipowners because common rules apply for all ships regardless of flag. In this respect, attention is drawn to the fact that the majority of the world merchant fleet (measured in deadweight capacity) is flagged and controlled in developing countries. In shipping there is simply no room for common but differentiated responsibility as ships under all flags compete for the same cargoes in the same markets. It is not meaningful to discuss any financial burden on shipping for ships from developed countries only, as this would make fleets from developed countries uncompetitive, and unquestionably distort trade. Shipping is an industry that is entirely exposed to the market mechanisms of supply and demand; it is cyclical and based on free and fair competition. It is also important to acknowledge and appreciate that maintaining the cost efficiency of sea transportation depends on shipowners" continued access to register their ships under the most cost effective flag, without compromising safety and quality. If, however, such a one-sided regulation were to be introduced, affected ships might be re-flagged to non-annex 1 countries. A flag neutral solution is thus the only way to ensure an efficient global GHG regulation of shipping. It is stressed that the risk of reflagging is real and important, and should not escape the attention of the AGF.

The shipping industry is, under the auspices of IMO, deeply involved in deliberations on how to further reduce emissions and how schemes to possibly regulate shipping could be applied. The work at IMO is well advanced and has already established draft rules regarding design of future ships and instruments for managing the merchant fleet in yet a more energy and climate efficient way. IMO is also well under way to developing a market based measure that could be applied, should it be decided to regulate shipping to reduce GHG emissions beyond its capability. In principle if shipping invests in emission reducing technology and through this effort fulfils recognised cap requirements, there should be no further financial or economic implications for the industry. Concrete proposals for cap based, levy based and efficiency based solutions have been thoroughly discussed and analysed by an Expert Group at IMO. A comprehensive report based on this work is going to be presented to IMO delegates at a meeting starting 27 September 2010 (MEPC).

The letter also addresses the complexities of international trade; moreover, the effects of creating a disproportionate financial burden on shipping compared with other modes of transportation should not be underestimated. One pertinent issue is the impact on developing countries themselves. The various proposals may have significant impact on some of the least developed countries (LDC) and little impact on some Small Island Developing States (SIDS) and other developing countries. This might be particularly true for raw materials that are primarily originating in LDCs. In this context, it is important to understand that increased freight costs will have a larger impact on goods with a low value to weight ratio, compared with products of a higher value. Cost of sea transportation is obviously a major factor in a company"s selection of where to manufacture its products and a significant increase in the cost of the sea-leg may certainly induce manufacturers to repatriate the production of their products.

Finally, the BIMCO President stresses that the above should in no respect be seen as defensive - shipping has a remarkable track record of constantly adopting and implementing measures to enhance safety and protect the marine environment and is an integral and vital part of the supply chain serving the world community and global trade.

This news is a total 4037 time has been read