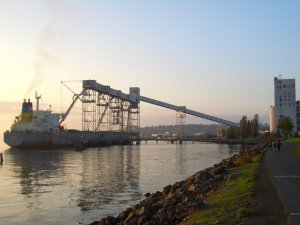 Agribusiness firm G3 (Global Grain Group) has announced it will build a new grain terminal at Port Metro Vancouver in southwest British Columbia, according to Reuters.

The $500m project is forecast to handle 8 million tonnes of grain annually once it is built.

Construction should get under way in March next year and is expected to be completed by 2020.

Winnipeg, Manitoba-based G3, which took a controlling interest in the Canadian Wheat Board (CWB) in 2015, wants the terminal so it will have its own export facility at Canada’s busiest grain port.

It should increase the flow of wheat and canola from Canada to markets in Latin America and Asia.

Critics worry the terminal will exacerbate already bad congestion at the port.

The facility, to be located on the north shore of Burrard Inlet, will be the first new terminal constructed at the Port of Vancouver in nearly 50 years, G3 claims.

G3 already runs inland and deep-sea port terminals all around the country from Saskatchewan to the Great Lakes and Quebec.

It is a subsidiary of G3 Global Holdings, which is a limited partnership between the Saudi Agricultural Livestock and Investment Company (SALIC) and Bunge Canada.

This news is a total 675 time has been read
Tags: G3 to build $500m grain terminal at Port Metro Vancouver