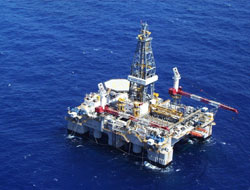 A consortium of Israeli companies, along with US-based Noble Energy Inc., will soon begin drilling for natural gas on the Tamar-1 concession in the Mediterranean Sea off Haifa.

The drilling program is expected to cost about $144.5 million

A consortium of Israeli companies, along with US-based Noble Energy Inc., will soon begin drilling for natural gas on the Tamar-1 concession in the Mediterranean Sea off Haifa.

Delek Group and Isramco, two Israeli companies in the consortium, said the Atwood Hunter oil rig that will drill at the Tamar-1 site has left West Africa and is expected to arrive at the drilling location in the second half of November.

Noble holds a 33% stake in the concession. The other partners include Delek and Avner Oil Exploration, which jointly hold 28%, Isramco 28%, Dor Gas Exploration 6%, and STX 5%.

The Tamar-1 concession, 90 km off Haifa, is the most prospective site off Israel, according to Isramco, with possible gas reserves of 1 billion cu m. The drilling program is expected to cost about $144.5 million.

Increasing domestic demand growth has impelled Israel to increase its supplies of natural gas?whether through offshore drilling or imports.

"Even relatively small commercial discoveries in the Israeli offshore could therefore make a significant difference to Israel's import requirement in the medium term," BMI said.

In September, Israel also was said to be on the verge of resuming formal negotiations to buy gas from BG Group PLC's Gaza field. The field, off the Gaza Strip, contains an estimated 25 billion cu m of reserves?more than 12 years of Israeli consumption at current levels.

In late September, Hezi Kugler, a director general in charge of gas at Israel's National Infrastructure Ministry, said he was hopeful the two sides could quickly agree on a framework for the talks.

Earlier negotiations collapsed in December 2007 after steep differences over the price Israel would pay for the gas, as well as disagreements over the flow of funds between the Jewish state and the Palestinian Authority.

Currently Israel has only two gas suppliers: Yam Thetis, which provides gas from Mary field in the Mediterranean off southern Israel, and East Mediterranean Gas Supply, which began supplying Egyptian gas in May.

However, the future of Egyptian supplies is uncertain. Earlier this month, Egypt's State Council Administrative Court said it will issue a ruling on Nov. 18 regarding a case lodged by a former ambassador and several lawyers against the export of Egyptian natural gas to Israel.