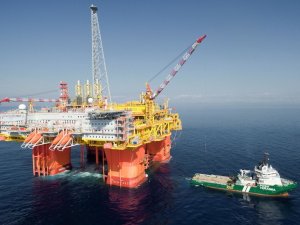 The Inpex-operated Ichthys LNG Project has commenced production of gas, marking the start of approximately 40 years of operations for this large-scale Australian LNG development.

The Inpex-operated Ichthys LNG Project has commenced production of gas, marking the start of approximately 40 years of operations for this large-scale Australian LNG development.

The produced gas will be gathered within the Central Processing Facility, Ichthys Explorer, where it will be separated into gases and liquids. Thereafter, the liquids will be piped to the nearby FPSO Ichthys Venturer while the gases will be transported via the 890-kilometer long Gas Export Pipeline to the onshore gas liquefaction plant at Darwin in Australia’s Northern Territory.

At the FPSO, the condensate contained in the well fluids will be processed to remove water and other impurities, then stored in tanks prior to export by tankers. At the onshore gas liquefaction plant, gases will be processed to remove impurities after which any remaining condensate will be extracted. The gases will then be separated and liquefied to produce LPG and LNG to be stored in tanks and shipped in sequence.

Ichthys condensate will be the third condensate introduced to the Asian market this year after that of Australia's Wheatstone and Malaysia's Bergading.

This news is a total 381 time has been read
Tags: Gas Production Starts at Ichthys