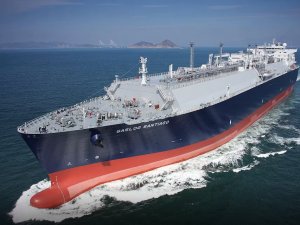 GasLog Partners LP announced today that it has entered into agreements with a new customer for two new charters plus options for an additional two charters.

The agreements include an approximately three and a half year charter for GasLog Santiago commencing in the third quarter of 2018 and a one year charter for a GasLog Partners 145,000 cubic meter steam vessel (either Methane Jane Elizabeth or Methane Alison Victoria as nominated by the Partnership) commencing in the fourth quarter of 2019. The charterer has options to extend the GasLog Santiago charter for up to an additional seven years and the steam vessel charter for up to an additional four years, both at escalating rates.

GasLog Santiago is a 155,000 cbm tri-fuel diesel electric liquefied natural gas (“LNG”) carrier built in 2013 and currently on a multi-year time charter with a wholly owned subsidiary of Royal Dutch Shell plc through July 2018. The vessel will undergo a scheduled drydocking during the second quarter of 2018, at which time the Partnership intends to enhance the vessel’s future marketability through the installation of a reliquefaction module ahead of commencing its new charter.

Methane Jane Elizabeth is a 145,000 cbm modern steam propulsion LNG carrier built in 2006. The vessel is currently on a multi-year time charter with a wholly owned subsidiary of Shell, which concludes in October 2019.

Methane Alison Victoria is a 145,000 cbm modern steam propulsion LNG carrier built in 2007. The vessel is currently on a multi-year time charter with a wholly owned subsidiary of Shell, which concludes in December 2019.

Andy Orekar, Chief Executive Officer of GasLog Partners, stated, “I am very pleased to announce the signing of these charter agreements with a new, high-quality counterparty. These charters will provide continuous employment for GasLog Santiago and either Methane Jane Elizabeth or Methane Alison Victoria, increase the Partnership’s contracted revenue visibility, diversify our customer base and support our year-on-year distribution growth guidance of 5% to 7% in 2018.”