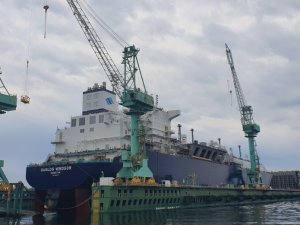 As informed, the newbuild facility covers the balance due to the shipyard on delivery and consequently the final installments of the seven units are fully funded.

The facility has a tenor of up to 12 years with an amortization profile of 18 years from vessel delivery. It is backed by the Export Import Bank of Korea (KEXIM) and the Korea Trade Insurance Corporation (K-Sure), which are either directly lending or providing cover for over 60% of the facility.

GasLog also announced that it has amended the covenants on its existing bank facilities to align them with the terms of the newbuild facility and the recently concluded GasLog Warsaw facility, resulting in significant improvements to the financial and non-financial covenants across all bank debt at both GasLog and GasLog Partners LP.

In addition, GasLog has called the remaining NOK 434 million (about USD 50 million) of its 2021 NOK Bond. The bond call will be settled in January 2020 with proceeds from its 2024 NOK 900 million bond issued November 2019, the covenants of which are aligned with its bank facilities.

GasLog’s consolidated fleet consists of 35 LNG carriers. Of these vessels, 19 –12 on the water and seven on order — are owned by GasLog, one has been sold to a subsidiary of Mitsui Co. Ltd. and leased back by GasLog under a long-term bareboat charter and the remaining 15 LNG carriers are owned by the company’s subsidiary, GasLog Partners LP.

This news is a total 1065 time has been read
Tags: financing, GasLog, LNG Carrier.