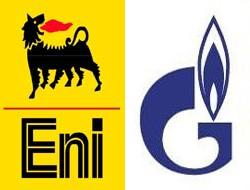 Gazprom and Italian oil firm Eni unveiled a plan on Saturday for a big new pipeline to take Russian gas under the Black Sea to Europe, undermining an earlier plan to extend a Turkish route.

Gazprom and Italian oil firm Eni unveiled a plan on Saturday for a big new pipeline to take Russian gas under the Black Sea to Europe, undermining an earlier plan to extend a Turkish route.

The 900 km (560 mile) "South Stream" pipeline would come ashore in Bulgaria and then branch to Austria and Slovenia in one spur and southern Italy in another, Eni's CEO Paolo Scaroni told a news conference with Gazprom Deputy Chief Executive Alexander Medvedev.

"The cost of the project and the distribution of stakes among the partners will be decided after the feasibility study, which is currently being done by Italy's Saipem," Gazprom spokesman Denis Ignatyev said.

Saipem was also the contractor for the "Blue Stream" pipeline from Russia to Turkey, also jointly owned by Gazprom and Eni. Gazprom has previously talked of expanding Blue Stream to southern Europe and Israel, but that would conflict with the new South Stream plan.

"We're going to continue to work with Turkey on plans to supply our gas across its territory and onwards to Israel," Gazprom's chief spokesman Sergei Kupriyanov said. He declined to say where that would leave the idea of expanding Blue Stream to south-eastern Europe.

South Stream is also likely to dash hopes of Gazprom joining the Nabucco pipeline project, a $6.2 billion plan, led by Austria, to carry Caspian and Middle Eastern gas to Europe via Turkey and the Balkans.

State-controlled Gazprom has made a fetish of owning its export routes since a disruption to supplies during a pricing dispute with Ukraine at the start of 2006 which sparked outrage across Europe, which gets a quarter of its gas from Russia.

Since then Gazprom has launched a northern route known as "Nord Stream" under the Baltic Sea to Germany, in a consortium with E.ON and Wintershall, part of BASF.

Just as Nord Stream cuts out Ukraine, South Stream would bypass Turkey and isolate Gazprom's gas supplies to southern Europe from any political risk in that country.

Apart from Germany, Italy is Gazprom's second biggest customer outside the former Soviet Union, relying on Russia for around 22 billion cubic metres of gas a year.

South Stream will come online three years after getting the necessary approvals, with the project costs shared equally by the two companies, the firms said.

The companies signed an agreement last year that lets Gazprom sell gas directly on the Italian market, a key part of its strategy to control all revenue from its gas to avoid losing most of the value to end-user suppliers.

For Eni, South Stream is a chance to export gas from assets it bought at auction earlier this year, when Russia forced the break-up and sale of former oil major YUKOS. With Gazprom holding a monopoly on exports, that opportunity is a rare one.

"The South Stream project is the third pillar of the strategic agreement signed by Eni and Gazprom in 2006," Scaroni said. "This new gas supply agreement will let Eni make the best use of its recently acquired ArcticGas and Urengoil assets."

Eni bought the production firms at a YUKOS auction in April, together with a 20 percent stake in Gazprom's oil subsidiary Gazprom Neft, for $5.8 billion.

This news is a total 1466 time has been read