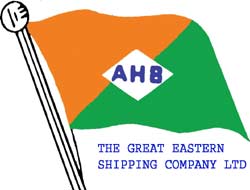 Great Eastern (GE) Shipping is negotiating with shipyards to cut a part of its order book of 10 ships worth about $600 million.

Great Eastern (GE) Shipping is negotiating with shipyards to cut a part of its order book of 10 ships worth about $600 million.

Great Eastern (GE) Shipping, India"s largest private sector shipping company, is negotiating with shipyards to cut a part of its order book of 10 ships worth about $600 million (Rs 3,000 crore) to overcome the downturn in the freight rate for dry bulk carriers and tankers. ?The companies are cancelling orders for new ships in the yards as the price for ships are falling,? said Jehangir Adi Master, an analyst with Pranav Securities, a Mumbai-based brokerage.

According to the brokerage, the price of a five-year-old Panamax dry bulk carrier with a capacity of 75,000 dwt, has come down to about $50 million (Rs 250 crore) from $80 million (Rs 400 crore) earlier. This is helping the shipping companies cancel their orders wherever their penalty is not high.

The Mumbai-based freight carrier has been already trimming its fleet size with selling its existing vessels. It has sold five bulk carriers and one tanker since November. Besides, it has cancelled the order of two dry bulk carriers worth $76 million (Rs380 crore) with the Chinese shipyards.

?We are negotiating with more shipyards to cancel some of our existing orders,? said a spokesperson for the company. ?We are still not sure how many of these would materialise,? she said.

Of the remaining order for 10 ships, most of the orders are with European yards where the contract clauses are stringent.

The ongoing financial crisis and the resultant drop in economic growth have led to a drop in demand for ships, especially the dry bulk carriers used for transportation of iron ore, coal, steel.

?The outlook for shipping industry is bad for at least the next 18 months,? said Jehangir. He is expecting the Baltic Dry Index to be in the range of 1000 to 3000 in this period. The demand for dry bulk carriers is expected to recover in about three to four years.

This news is a total 1762 time has been read