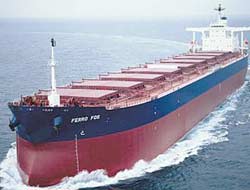 Genco Shipping & Trading Limited announced yesterday that it has agreed to acquire nine Capesize vessels from companies within the Metrostar Management Corporation group for an aggregate purchase price of approximately $1.1 billion.

Two of the nine Capesize vessels have already been built in the first quarter of 2007 and are expected to be delivered to Genco during the third quarter of 2007.

Genco expects to see the remainder of the vessels join their fleet after they are completed between the fourth quarter of 2007 and the third quarter of 2009.

Upon completion of the acquisition, Genco's fleet will consist of nine Capesize, seven Panamax, seven Handymax, and five Handysize drybulk carriers, with a total carrying capacity of approximately 2,559,000 dwt and an average age of 8 years representing an increase of approximately 159% on a tonnage basis.

Robert Gerald Buchanan, President, commented, "Consistent with Genco's goal of becoming the bellwether in the industry, the agreement to acquire nine Capesize vessels will expand the Company's fleet of high quality vessels by well over 100 percent on a tonnage basis. By acquiring the largest class of drybulk vessels, we will also enhance our position for benefiting from the strong demand for iron ore and coal in China and other developing countries. With this acquisition, Genco has once again utilized management's strong industry relationships to further enhance the Company's modern fleet profile and future commercial prospects. Given that four of the nine Capesize vessels already secured on time charters ranging from approximately three to four years, we are well positioned to provide shareholders with stable earnings while maintaining the ability to benefit from the industry's favorable long- term fundamentals."

This news is a total 864 time has been read