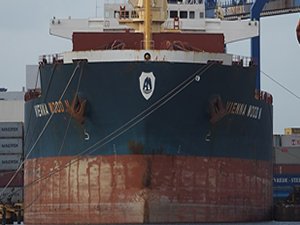 The families of the lost crew of the fishing boat Liberty 5 have reached a settlement with the owners of the bulker Vienna Wood N, which struck and sank the smaller vessel off Mamburao, the Philippines in June.

On the night of June 27-28, the 150-foot fishing vessel Liberty 5 collided with the Vienna Wood off Mamburao, a community on the west coast of the island of Mindoro. The Liberty 5 went down, and none of her 14 crewmembers were found. The Philippine Coast Guard alleges that there was a three-hour delay between the time of the incident and the time of a received distress call.

According to the Philippine Coast Guard, shipowner Nomikos Transworld Maritime has now reached a final civil settlement with the families on terms agreeable to all parties. The settlement also includes a payment to Irma Trading, the Liberty 5's owner, for the value of the vessel.

Philippine Coast Guard Commandant Adm. George Ursabia, Jr. was present at the signing, and he told local media that the settlement amount had been increased to a "generous" level. The initial agreement proposed a payment of about $820,000 for Irma Trading and $20,000 each for the families - about three times the average Philippine family income.

However, the agreement does not cover the criminal charges leveled against Vienna Wood's owners and crew, and that proceeding continues.

“The PCG, while elated over the settlement of the civil case, assures that it will continue to pursue the criminal case filed against MV Vienna Wood and will respect the final decision of the court,” the agency said in a statement.

The charges filed against the crew include "reckless imprudence resulting in multiple homicide and damage to property." The defendants include Nomikos; the Vienna Wood's master, Capt. Zhang Weiwei; deck officers Yang Xifeng, Yi Lei, and Shi Bin; and engineering officers Fan Qoujin, Xia Zhen and Wang Xingtu. Nomikos has said that it is fully cooperating with the investigation.

All 20 crewmembers of the Vienna Wood have been barred from leaving the country, and the vessel is under arrest at Batangas. The detention has not made the vessel exempt from the hazards of seafaring: Vienna Wood was recently boarded by a robber at anchorage, and the ensuing confrontation resulted in a crewmember injury requiring hospital treatment.

This news is a total 2828 time has been read
Tags: "Generous" Civil Settlement for Families in Vienna Wood Collision