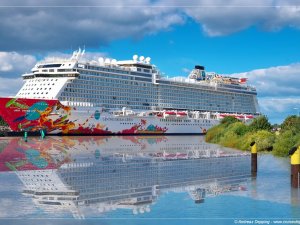 The move is being taken in cruise circles as a more rational approach to what was initially deemed an overly ambitious shipbuilding programme at the yard group created earlier this year from Genting Hong Kong’s acquisition of Lloyd Werft and Nordic Yards.

It follows last week’s announcement by another Genting Hong Kong subsidiary, Crystal Cruises, that its planned orders for three 100,000-gt cruiseships at MV Werften were also being put back by three years.

According to Lim, MV Werften will begin its cruise newbuilding activities with a series of three 25,000-gt expedition cruiseships and four river cruiseships for Crystal Cruises.

These ships will keep the yard group busy until 2021, after which production will be stepped up and work will begin on the larger Crystal and Star ships.

“MV Werften will build ships for all three of our brands,” he added, indicating that in future the yard group will be capable of meeting most, if not all, of the newbuilding requirements for its parent company’s cruise fleet.

Initial plans for MW Werften included a series of three 100,000-gt cruiseships for Crystal Cruises for delivery between 2019 and 2021, as well as the two Star ships that were originally slated for 2019 and 2020 delivery.

Some industry insiders questioned whether MV Werften would have the technical and physical capability to complete Genting’s ambitious projects.

Starting with the smaller ships will allow the yard group time to boost its capabilities and build its expertise before tackling the bigger projects.

Genting Hong Kong ordered ships almost exclusively at Meyer Werft prior to the formation of MV Werften. Meyer is now likely to lose it as a customer, although there have so far been no suggestions that Norwegian Cruise Line, in which Genting Hong Kong is still a large shareholder, has any plans to take its business away from Papenburg.

This news is a total 2148 time has been read
Tags: Genting delays move into big ships at MV Werften