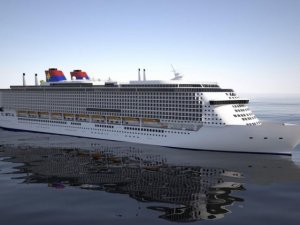 The two mega cruise ships will be among some of the world’s largest and will be built for Genting’s Star Cruises brand and deployed in the Chinese market. The 201,000 ton vessels will be known as Global-class and will include 5,000 lower berths each.

The eight other vessels will be built for Crystal Cruises and comprise of 6 river cruise ships, an expedition yacht and an “Exclusive Class” vessel.

Delivery of the Global-class vessels is scheduled for 2019 and 2020.

The ten-ship order was placed at Lloyd Werft Group, which was formed last month with Genting’s acquisition of Nordic Yards’ three shipyards in Wismar, Warnemunde and Stralsund, Germany. Prior to the acquisition, Genting only had the Lloyd Werft shipyard in Bremerhaven. The formation makes it one of just four shipbuilding groups with the ability to build large cruise ships using the two large covered dry docks in Wismar and Warnemunde.

“We are pleased that Genting chose Lloyd Werft Group for the construction of their new vessels as the company has built all but one of its new cruise ships in Germany for the Star, Dream and NCL brands due to the company’s desire for quality-built cruise ships,” says Rüdiger Pallentin, the Managing Director of Lloyd Werft Group. “We have the ability to tap into the complex cruise ship subcontractor industry in Europe, many of whom are centered in Germany and we can build cruise ships without major uncertainties in delivery and pricing. The Lloyd Werft Group has two huge covered new building drydocks, a ship launching platform and half a million square meter of covered fabrication halls to build quality cruise ships in all weather conditions.”

The Global-class ships will be largest cruise ships ever built in Germany, even bigger than the Quantum-class ships built at Meyer Werft.