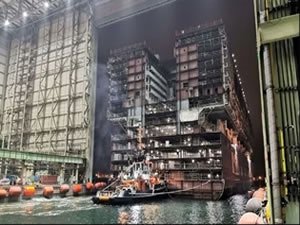 The filings known as insolvency under German law included the MV Werften group in the east as well as Lloyd-Weft in Bremerhaven.

The German shipyard operations of Genting Hong Kong filed for bankruptcy on January 10 after last-minute talks between the Malaysian parent company and the German state officials failed to reach an agreement on the terms of a government loan to keep the operations going.

The filings known as insolvency under German law included the MV Werften group in the east as well as Lloyd-Weft in Bremerhaven. Discussions are ongoing to determine the short-term situation.

At the end of last week, MV Werften said that it was in danger of violating convents on its loan that was forcing the company to delay payment of wages to its nearly 2,000 employees.

After being informed of the bankruptcy filing, representatives of the union said that employees were willing to show up for work tomorrow at the yard while officials from the state and federal government both addressed the situation calling for a long-term restructuring of the operations.

An internal announcement circulated to the unions and their members at the end of the day on Monday called it a bitter day while executives from Genting were quoted in the German media as saying the government had lost sight of the number of jobs and important financial contribution from the shipyards. "Without the coronavirus, we would never have asked the government for a single euro," Genting Hong Kong President Colin Au said in statements reported in the German press.

The impasse came about over the financial contributions and guarantees the federal government was insisting on from Genting.

The state of Mecklenburg-Western Pomerania, where MV Werften is located, initially had provided bridge loans in the fall of 2020 to restart operations at the shipyard after it closed during the pandemic.

Those loans were used to complete an expedition cruise ship for Genting’s Crystal Cruises and in June 2021 it was announced that the federal and state governments had developed a new package to restructure the shipyard operations to complete construction on the first of two giant 208,000 gross ton Global Dream cruise ships.

The package was restructured several times and last week reports said the government was offering €600 million (approximately $675 million) to continue the operations. Under the federal government Economic Stabilization Fund, Genting was required to invest 20 percent of the value of the loan.

The Global Dream cruise ship would also have served as collateral for the loan. "The government did everything possible to avoid insolvency and save jobs.

However, the owners rejected our offer of help and the consequence is insolvency," Economy Minister Robert Habeck said Monday. The government reportedly offered to lower Genting’s participation to €60 million.

Genting said that it had provided $30 million which was sufficient to access a portion of the loan that they tried to draw down in December. Genting reportedly offered to increase its participation to $45 million.

Au said Genting had submitted four different offers to the government during the negotiations. Management of MV Werften filed for insolvency at the Schwerin District Court. Under German law, insolvency administrators must now be appointed to begin working on restructuring.

A government will provide unemployment payments to the workers. Germany’s minister and finance officials for the state addressed the situation late on Monday saying the focus needed to be on maintaining the jobs and completing construction of the Global Dream cruise ship. The ship is reported to be 75 percent complete with delivery expected later this year.

They are also calling for a long-term restructuring of the company, possibly splitting the three yards in the east into independent operations and possibly refocusing on the offshore industry. They said it was clear the yards could not continue to function in their current structure.

Lloyd-Werft, also owned by Genting, filed for bankruptcy as well on Monday. The shipyard, which had been a major repair and overhaul facility for the cruise industry, has also increasingly focused on the luxury yacht business.

Last year, Genting said it would close Lloyd-Werft, but recently it was reported that they were negotiating for the sale of the yard. A company from the United Arab Emirates has reportedly signed a letter of intent to acquire 50 percent of the yard, which employed approximately 300 people in Bremerhaven.