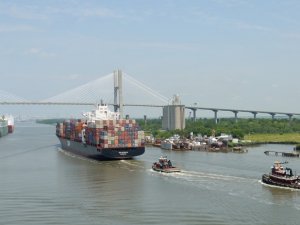 This marks a 14 percent increase in trade levels over volumes moved through Savannah just three years ago, or an additional 550,000 TEUs.

Over the same period, the authority has increased the annual capacity at the Port of Savannah from 5 million to 5.5 million TEUs.

“Through incredible teamwork from the GPA and the ILA on the docks, to the motor carriers and Class I railroads, and to our partners throughout the supply chain, Georgia has managed to create a powerful hub for commerce that is creating jobs and economic opportunity in every corner of the state,” said GPA Executive Director Griff Lynch.

With the first phase of GPA’s Mason Mega Rail project opening this spring, cargo moved by rail has grown twice as fast as the authority’s overall three-year growth rate in container trade.

For the calendar year-to-date through October, the GPA moved 3.88 million twenty-foot equivalent container units, an increase of 222,800 TEUs or 6 percent, year over year.

The Port of Savannah is handling the highest volumes of any container terminal in the U.S. Southeast, moving as many as 8,000 TEUs per ship.

The Port of Savannah’s aims to increase irs annual capacity to 11 million TEUs, up from the current capacity of 5.5 million TEUs per year.

The authority plans to expand beyond its 1,200-acre footprint at Garden City Terminal to establish a new container port on Hutchinson Island, across the Savannah River channel. The 200-acre Georgia site sits directly across from Ocean Terminal in Savannah. It will have an annual capacity of 2.5 million TEUs.

This news is a total 155 time has been read
Tags: Georgia Ports Authority.