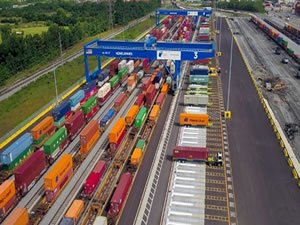 The Georgia Ports Authority reported Monday that the Port of Savannah is on track to achieve a monthly record for September, following closely after the all-time record set last month.

Based on cargo bookings, GPA is projecting roughly five percent growth for September compared to the same month last year, despite the challenges of the COVID-19 era.

"We frankly didn't anticipate growth for the months of August and September, but we are gratified by the loyalty of our customers and the dedication of our employees," said Lynch. "Although there is still much work to be done, Savannah's status as the number-one export port means it will play a critical role in the nation's economic recovery."

Other ongoing projects to increase capacity at GPA include the Savannah Harbor Expansion Project - now 75 percent complete - and the Mason Mega Rail Terminal, which is close to 50 percent complete. The first nine working tracks on the expanded rail yard are now operational, and the second set of nine tracks will be commissioned in the summer of 2021.

This news is a total 2919 time has been read
Tags: Georgia Ports Predicts Another Record Month for Container Volumes