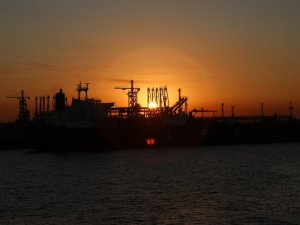 A Germany-flagged liquefied gas carrier grounded off Indonesia in 2018 due to the not fully developed electronic chart display and information system (ECDIS), a report by Germany’s Federal Bureau of Maritime Casualty Investigation (BSU) shows.

At the time of the incident, the ship was carrying a cargo of 18,000 tons of ammonia. However, no cargo escaped since only the forepeak and ballast water tanks were damaged.

Two days later, the 2005-built Pazifik could be refloated by exchanging cargo and ballast water. The vessel headed to a shipyard in Singapore under its own power and accompanied by a tug.

During the repair, about 50 meters of the double bottom was renewed and the rudder was repaired. The latter was damaged when the ship refloated from the rocks during a minor collision with the tug.

As explained by the BSU, the ship and the equipment were in a good and seaworthy condition. No technical deficiencies were detected in the scope of the investigation.

“The tank motorship Pazifik was sufficiently manned with a qualified crew. Work hours and rest periods were adhered to. Human error or erroneous behavior was not detected,” the BSU said.

“This accident, which ended with the grounding of the Pazifik, can be ascribed to the product ECDIS which is systemically not yet fully developed, approved as primary aid to navigation and displaces other important sources of information, such as sailing directions, without a consistent replacement for it,” the BSU added.

It further said that the actions taken after the grounding to ensure the safety of the crew, securing the ship and the cargo, and the assessment of the situation, were carried out in “a professional and seamanlike manner”. Since the company took action after the grounding, the BSU dispenses with the publication of safety recommendations.

This news is a total 673 time has been read
Tags: BSU, ECDIS, Gas Carrier, Grounding, Indonesia.