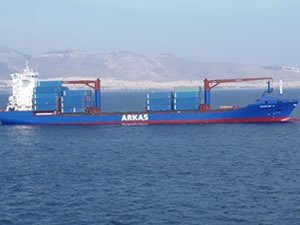 On Monday, the German military said Turkey prevented its forces from searching a ship in the Mediterranean bound for the Libyan port city of Misrata suspected of delivering arms. Turkey claims the ship was transporting “humanitarian aid”.

A U.N.-imposed arms embargo has been in place on Libya since February 2011.

According to a spokesperson of the German military, and video of the event,  personnel boarded the Turkish vessel, Rosaline-A, but were prevented from searching its cargo following a timely protest by Ankara.

German Defense Ministry spokesperson Christian Thiels said that the German crew requested permission to board. “Upon receiving no reply, a German search team was brought by helicopter to the freighter and commenced the search, and the crew was ‘cooperative’.”

During the search, Turkish authorities notified German authorities that they were not permitting the search. The German search team ended the search and disembarked, heading back to their frigate, said Thiels.

Thiels stated that the order to board the ship came from the Rome-based operation headquarters for the NATO mission to enforce the U.N. embargo.

The Rosaline-A continued on its way to Misrata after the search, the official said, adding that Turkey planned to lodge formal complaints about the incident.

The official spoke on condition of anonymity in line with Turkish government rules.