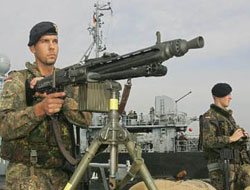 The German parliament has agreed that its navy is allowed to strike against pirates in the Gulf of Aden.

Up to 1,400 German soldiers and one frigate will participate in the European anti-piracy mission

?Atalanta?, according to an agreement struck today.

The mission, which is expected to cost the german government ?45m, should secure the delivery of relief goods to Somalia as well as improve the safety of the trade routes.

The mandate is valid for one year.

The vast majority of the parliament agreed to the naval mission. Only some delegates of the Left Party and the Greens voted against it, arguing that fighting pirates is a task for the police rather than the navy.

Defence minister Franz Josef Jung underlined that the mandate is a robust one, which also allows the use of force. The German navy can use weapons and sink pirate ships if necessary.

?It is a step in the right direction,? said Hans-Heinrich Nöll, managing director of VDR. So far, the navy had only been allowed to provide emergency assistance in case of a pirate attack. ?Now the navy can fight the causes of piracy,? said Mr Nöll.

He hopes that the navy will act against the mother ships of the pirates. ?Only equipped with their little speedboats the pirates cannot do anything,? he said. Mr Nöll is optimistic that the Atalanta mission will have an immediate impact on the situation in the Gulf of Aden.