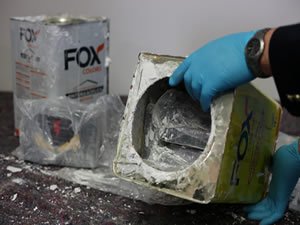 Customs authorities in Germany and Belgium have seized a record haul of more than 23 tonnes of cocaine destined for the Netherlands in two raids this month, Dutch prosecutors said on Wednesday.

The two shipments together represented a street value of roughly 600 million euros ($730 million), the prosecutors said, making it the biggest seizure of cocaine headed for the Netherlands.

Prosecutors said a 28-year-old Dutchman had been arrested on Wednesday who was registered as the recipient of the containers in which the drugs were found.

In Hamburg, Germany, 16.17 tonnes of cocaine were found in over 1,700 tins of wall filler which had arrived on a container ship from Paraguay.

In the Belgian port of Antwerp around 7.2 tonnes of the drugs was found hidden in a container filled with wood blocks which had been shipped from Panama.

Paraguay’s anti-drugs authority said later on Wednesday it carried out four simultaneous raids on premises allegedly linked to both the cocaine shipments discovered in Europe.

“We are finding evidence such as paint cans that are similar to those that were seized (in Europe),” Francisco Ayala, a spokesman for Paraguay’s National Anti-Drug Secretariat (SENAD) told reporters during one of the raids.

Envases Paraguayos, the firm that owns the paint factory that was raided, denied involvement, saying in a statement that the company was a victim of organized crime gangs who had tampered with the shipment.

Paraguay is a popular transit country for cocaine trafficking from Andean countries to Europe, according to the United Nations.

However, its interior minister Arnaldo Giuzzio on Wednesday said “Although the containers depart from our country, the cargo can also be contaminated (with drugs) in other ports.”

This news is a total 5355 time has been read
Tags: Belgian port of Antwerp , Netherlands , SEIZE A RECORD 23 TONNES OF COCAINE FOUND IN SHIPPING CONTAINERS