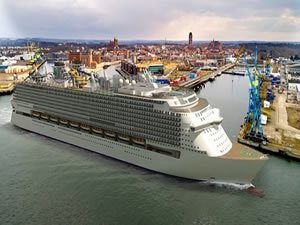 Germany's legendary MV Werften shipyard got approval from the German federal government for new sets of economic aid as a financial crisis looms on the horizon for the same.

The shipyard went bankrupt after 14 months of operational suspension due to the pandemic and the ongoing halt in the shipbuilding industry, especially in the cruise sector.

The final agreement by the German federal government aims to set up the Economic Stabilization Fund, which will serve upon extended financial aid.

It came after months of conciliations between shipyard stakeholders and the German government.

The nearly completed cruise ship-- Crystal Endeavor and GLOBAL DREAM cruise from Genting will mostly be using the aid for their constructional as well as post-constructional requirements.

The GLOBAL DREAM ( 208,000 gt) has been under construction since 2018 for Genting’s Asian cruise line Dream cruises and is expected to be completed by 2022 after receiving the funds.

The yard will receive the money in two shares, an initial $261 million, as a secured loan facility and as a surplus $85 million limited-recourse equity stake by Germany.

Carsten J. Haake (MD, MV Werften) said "We are pleased with the outcome and would like to express our sincere gratitude to the ministries of the federal and regional governments, the KfW investment and development bank, and the other banks for their commitment, and also for the hard and just negotiations during the past few months," MV Werften, which aims to build cruise ships for Genting was set up in 2016.

With funds in place, MV Werften can attract new orders. Crystal Endeavor’s sister ship could be in line.

With further funding, it will also resume its work on the second GLOBAL DREAM cruise ship. Considering a tick on the economic agreement with Germany, Genting is reconstructing itself after surviving the heavy blow to the tourism industry by the pandemic.