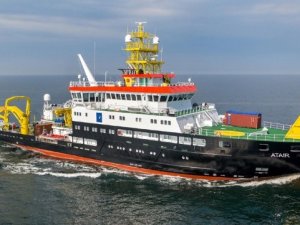 A unique new research vessel is being built in Germany at Fassmer shipyard in Berne/Motzen, Germany.

Measuring approximately 246 feet in length, the vessel will replace a 30-year-old research ship of the same name. Once delivered to its owners, the new Atair will be used to monitor the marine environment as well as conducting measurement exercises and wreck searches in the North and Baltic Seas as well as in the North Atlantic.

The vessel will be equipped with a broad range of modern scientific equipment and laboratories, navigation and radar equipment as well as sonar and echo sounders. It also features an innovative hull shape that will make the vessel quieter in operation as well ensuring that it meets the highest quality and performance standards.

Among the broad range of scientific capabilities designed into the ship are two wet laboratories, a dry laboratory, and an oceanography and hydrography laboratory. The Atair will also have a device for measuring air pollutants in ocean shipping, a sliding beam for geological work on the seabed and extensive diving equipment, including a diver pressure chamber. Additional desk space also provides areas for laboratory and transport containers to be transported on deck.

The decision to power the Atair with LNG-fueled engines was made because of the significantly less emissions compared to a traditional diesel-fueled ship. As a result, the new Atair will not only comply with the TIER III exhaust emission regulations but also with the EPA TIER IV rules regarding soot particles. Furthermore, the underwater sounds of the vessel are optimized, which protects the marine environment and ensures optimal conditions for the scientific work.

The Atair is expected to enter into service before the end of 2020, replacing the prior research vessel that has been in service since 1987.

This news is a total 1501 time has been read
Tags: Germany Prepares to Commission World's First LNG-Powered Research Ship