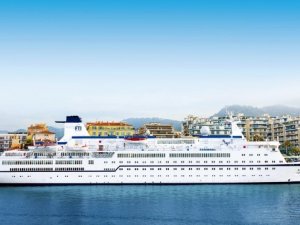 The company, which operated one smaller cruise ship, becomes the fourth cruise line to announce they would be ceasing operations due to the pandemic.

German tour operator the FTI Group announced that it will be ending its cruise line as part of a group-wide restructuring brought on by the global pandemic. The company, which operated one smaller cruise ship, becomes the fourth cruise line to announce they would be ceasing operations due to the pandemic.

The tour operator purchased its 9,500 gross ton cruise ship which is named Berlin, in August 2011 launching its cruise line FTI Cruises. The smaller deluxe cruise ship, which accommodated just over 400 passengers, was marketed primarily to German-speaking customers. The ship mostly operated cruises in the Caribbean as well as the Mediterranean and Europe.

According to a spokesperson for FTI Group, the company has officially decided to give up the FTI Cruises brand as of November 1, which is the end of its current fiscal year. In addition to cruises aboard the Berlin, FTI also marketed cruises on a range of other cruise line’s ships.

Reports in the German media say that the closing of the cruise line is part of a broader restructuring of the company that will include laying off up to 20 percent of the workforce and also closing a travel agency that booked trips for business and consumers. The company through a subsidiary ran hotels in a range of countries, including Gambia, that are also being closed.

The spokesperson said that no decision had yet been reached regarding the future of the cruise ship Berlin. Built in 1980, the Berlin has been anchored at Malaga, Spain since suspending cruises in March. She was originally operated by another German tour company, Delimann also as the Berlin but was briefly chartered to run cruises in Asia. In 1986, the ship was lengthened increasing its original passenger capacity of 330 people to the current maximum of 420 passengers. Delimann sold the Berlin in 2004 to British cruise operator Saga Cruises, which ran her for the next seven years as the Spirit of Adventure. She returned to the German market renamed FTI Berlin after FTI acquired the ship in 2011.

FTI’s decision to end its cruise brand marks the fourth small cruise line to announce in recent weeks that they were going out of business due to the impact of the pandemic on the cruise industry. Spanish cruise operator Pullmantur filed for reorganization under Spain’s insolvency laws. Cruise and Maritime Voyages, a UK-based cruise company with operations in the UK, Germany, and Australia was also placed under administration when it failed to secure new financing. Further, Birka Cruises that operated short cruises from Stockholm announced that it was also ending its operations.

The major cruise lines have all sought additional capital from the financial markets to help them manage through the current period. The world’s largest cruise company, Carnival Corporation recently announced that it was selling nine additional ships and expecting a total of 13 ships to be leaving its fleet as it works to align its operations and lower costs.

This news is a total 1258 time has been read
Tags: Germany's FTI Cruises Becomes Fourth Cruise Line to Cease Operations