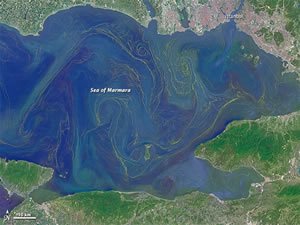 A massive algae bloom in the Sea of Marmara is clogging fishing nets, scaring off tourists and threatening marine life, according to Turkish media.

The algae produces voluminous quantities of marine mucilage, or "sea snot," which is piling up on the surface and clogging life on the sea bottom. In some areas it is so thick that fishermen cannot effectively cast their nets, and some communities - like the village of Tekirda? - have had to cease fishing for weeks.
Extreme algae blooms are often caused by excess nutrients from agricultural runoff and sewage, as well as elevated water temperatures. At its worst, the mucilage from a severe algae bloom can be so thick that it blankets the bottom, smothering crabs and plant life. When algae dies, its decomposition consumes the dissolved oxygen in the water, potentially creating anoxic "dead zones." Fish kills have been reported near the Sea of Marmara's southern shores.

"The gravity of the situation set in when I dived for measurements in [the Çanakkale strait] and discovered severe mortality in corals," marine biologist Dr Bar?? Özalp told The Guardian.

Climate-related warming may be a contributing factor, but the mostly-enclosed Sea of Marmara also faces challenges related to nutrient pollution from sewage, agriculture and industry. There is an additional factor: like the Black Sea, the Sea of Marmara has unusually low salinity in the upper water column, and this provides an inviting environment for algae growth.

This year's bloom is particularly noxious, but it is not the first: NASA captured spectacular imagery of algae bloom spanning the width of the Sea of Marmara in 2015 .

This news is a total 793 time has been read
Tags: Marmara , NASA , Giant Algae , Kills Coral in Sea of Marmara