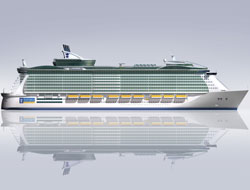 The keel of Allure of the Seas, the second in the series of two of the world's largest cruise ships was laid at the Turku yards of STX Europe.

ALLURE OF THE SEAS will, with her sister, be the biggest cruise ship in the world...

The keel of Allure of the Seas, the second in the series of two of the world's largest cruise ships was laid at the Turku yards of STX Europe.

The keel laying ceremony marked the placement of the very first block of Allure of the Seas in the dry dock where the ship will begin to take shape. The event also included the coin laying ceremony, with representatives of the Owner, Royal Caribbean Cruises Ltd. and the Builder, STX Europe placing the lucky coins under the keel, the tradition for bringing luck and also symbolising the keen cooperation between the owner and the yard.

The "keelblock" of this size of the vessel weighs several hundreds of tons. The building of this big challenge has been compared to a huge 3-dimensional puzzle. One vessel consists of 180 grand blocks, the biggest with a size of length 22 m, width 30 m and weight 600 tons. The vessel´s weight is 12 times the weight of the Eiffel tower.

STX Europe in Turku has on its orderbook two huge luxury cruise vessels of the Oasis class to be delivered for Royal Caribbean in 2009 and 2010. Behemoth, leviathan, colossal, overwhelming are words that have been used to describe these giants; and the truth is they will be the world´s largest cruise vessels taking an enormous step into the future with their bold design, daring innovation and technological advancements.